In this video, produced by the LEP and Marketing Birmingham, I discuss the impact of the creative industries within the Greater Birmingham and Solihull area.

I will be speaking at this conference on Thursday 16 June at Birmingham City University. Register for free at eventbrite.

An essential conference for creative, cultural and digital organisations of any size, put on by Creative City Partnership, Greater Birmingham & Solihull Local Enterprise Partnership with support from Birmingham City University.

Opportunities – Attendees will have access to current funding initiatives and will have a chance to influence future plans for sector support & growth.

I was recently asked what I would like to see from a Metro-Mayor, you can read my reply on the Downtown in Business website, along with Rob Elkington and Gary Topp.

I spoke with Living Magazine about the joys of living in Birmingham. Read the full article here.

With the BBC entering one of the most challenging periods it has ever faced, the Creative Industries Federation is holding three events to investigate the role of the Corporation in the creative industries and what any change in its scale and scope might mean for British cultural life in the future.

We want to hear from the diversity of our membership – from orchestras to video gamers and dancers to movie-makers and recording labels.

The aim is to gather evidence that will form part of a submission to the Government’s Green Paper review. There will be round-table discussions in Manchester and Birmingham followed by an event with an expert panel, and discussion from the floor, in London, kindly hosted by King’s College London. Members will be given priority.

Bringing together the creative industries community in Birmingham, across the public and private sector.

Here’s a great example of Birmingham as a fused cluster – http://www.ncub.co.uk/videos/fuse-video.html

Here are some messages from last year that are as relevant in 2015 as we grow the creative economy in Birmingham and the West Midlands region. Last year the Young and In Brum article in The Drum magazine highlighted our direction of travel and this year we really are gearing for a bigger growth in the creative economy.

This increase has been hailed as evidence that the region, traditionally known as a manufacturing heartland, is also able to attract and nurture creative firms, particularly those in the IT and computer software industries.

In the same period, the overall total number of jobs in the region rose by just 3% illustrating the key role creative industries can play in creating wealth and employment in the region.

There was also a significant increase in jobs in music, performing arts and visual arts, up from 10,000 to 12,000.

Almost a quarter of the UKs Computer Games workforce is located in the region. We know about Codemaster, but what about “Team Football” who have an official contract with Fifa or “Flix Interaction”, they are helping this sector to grow and are putting us on the international stage. It is estimated that tax breaks on video games production launched last year will create more than 5,000 UK jobs but these jobs will not just fall into our region we have to find, nuture and grow new developers if we want to be in this particular game!

Other parts of the country have also seen an increase in creative jobs but the national rise is just 10% over three years compared to our 20%.

Congratulations to BBC Midlands Today celebrating 50 years of broadcasting this year. Here I am reporting from the old Bullring many years ago. 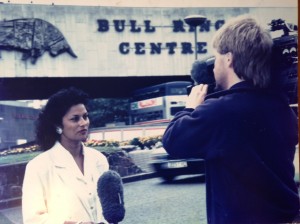